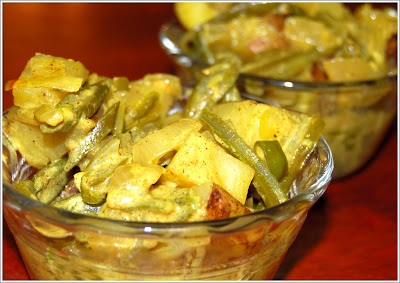 Cooking up all this Trinidadian food made me think of V.S. Naipaul, the literary genius and Nobel prize winner who hailed from Trinidad, although he later became a British citizen.

Naipaul, like many of Trinidad's natives, traced his roots further back to India-- he was the descendant of indentured Indian laborers shipped into the Caribbean by the British colonizers (that's why Caribbean food has strong overtones of Indian cuisine). I was a kid when Charu, who's married to my cousin Neetu and who was a journalist for a Bombay newspaper, got the enviable job of interviewing Naipaul and accompanying him as the writer researched some of Bombay's venues for a book.

Neetu's sister, Maithili, was my best friend, and I'd spend a lot of time at their home. Every day Charu would return with stories that I don't remember any more but which, I recall, dovetailed perfectly with Naipaul's fame as a rude, cranky, egotistical and eccentric character. But there was no doubt that Charu was enjoying every minute he was spending with this legendary personality.

Just how lucky he'd been became clearer to me when I read my first Naipaul book (also Naipaul's first): a short novel written in 1957, called The Mystic Masseur. The book was made into a movie some time in the last decade with Aasif Mandvi (the "brown guy" on the Daily Show with Jon Stewart) in the lead role and it was pretty good too.

Mystic Masseur remains, to date, my favorite Naipaul work because I'm a sucker for intelligent humor and irony, and this book has loads of it. The story centers around a Trinidadian of Indian origin, Ganesh, and the hilarious journey he makes from an unsuccessful masseur to a super-succesful mystic who "miraculously" heals people, to a politician.

What makes the book truly remarkable is the beauty of Naipaul's writing, the delightful character of his words and how beautifully they capture the colloquialisms of the English spoken in Trinidad:

"My mother distrusted doctors and never took me to one. I am not blaming her for this because in those days people went by preference to the unqualified masseur or the quack dentist.

'I know the sort of doctors it have in Trinidad,' my mother used to say. `They think nothing of killing two three people before breakfast.'

This wasn't as bad as it sounds: in Trinidad the midday meal is called breakfast."

You could definitely have my Green Beans and Potato Curry for a Trinidadian breakfast, along with these delicious stuffed chickpea-stuffed rotis that I posted yesterday. Here's the recipe, adapted from a Sri Lankan curry from World Vegetarian. Enjoy! 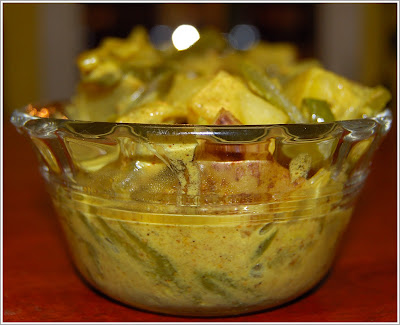