Each spring, I plant a cucumber vine because there's nothing as potent as a fresh, cooling, absolutely refreshing slice of cucumber to beat the humid summer blues we endure in D.C. Each year, it rewards me with armfuls of cucumber despite my confirmed lack of gardening skills (Desi will swear to it) and my absolute reluctance to water anything that grows in the ground (isn't it a job for the rain?).

Jay, on the other hand, is fascinated with gardening and watching things grow. He also loves cucumbers and last Sunday he spent an hour getting every weed out of the garden patch after I planted a horror story in his gullible little head about how the weeds were going to smother  the cucumbers and stop them from growing (now is that smart parenting, or what!). Every time he sees a cucumber that has grown big enough to actually look like one, he starts hounding me on whether he can pick it and eat it. He'd happily eat cucumbers for breakfast, lunch and dinner, that one.

Yesterday, I managed to sneak a cucumber past Jay to make these, some of my favorite summer treats: Cucumber Pancakes.

You will rarely find cucumbers in Indian restaurant food, outside of Cucumber Raita, but there are ways and ways that people across India use this vegetable. More often than not it is cooked, which seems rather counter-intuitive because cucumbers are so darn good just fresh and raw. But the cooked recipes are superb too and well worth trying.

Cucumber Pancakes are a rather traditional food in the Konkan region of India, where my father comes from, and they are usually made with rice flour, cucumbers, and a few spices. But in this recipe I have for you today I veered slightly away from tradition to make the pancakes healthier and -- if possible -- tastier. I used a mix of rice and chickpea flours to balance the proteins, and I added another favorite garden find that screams summer: mint. Mint and cucumbers are an absolutely dazzling -- and natural -- flavor combination, and in these pancakes they are spectacular together.

The cucumbers cook just slightly in the heat from the skillet, so they retain their freshness and flavor, but soften up just enough to perfectly complement the crispy pancakes. You can make these pancakes completely fat-free: just use an oil spray to coat the skillet. If you do decide to use oil, all you have to do is brush some lightly on the skillet.

Cucumbers are a really healthy food for you-- didn't I just say they give and they give?

You're probably up to your ears in cucumbers by now from reading this, but honestly, I can't stress this enough: there's just something about the taste of the cucumber in this pancake that is absolutely mindblowing.

You'll just have to make them to find out. 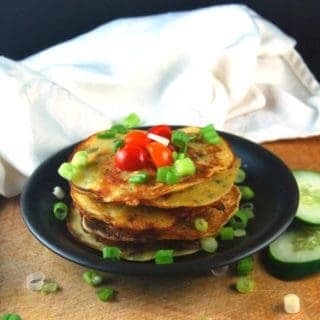