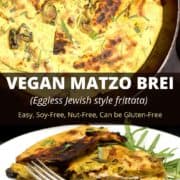 Matzo Brei is a classic Jewish frittata-like breakfast food often eaten at Passover. In my vegan version, soft, savory chickpea "eggs" flecked with mushrooms and rosemary contrast deliciously with shards of crispy, slightly charred matzo crackers. It's comfort food through and through. Also a soy-free, nut-free recipe, can be gluten-free.

As lovely as chickpea "eggs" are in so many vegan dishes, in this vegan matzo brei (usually pronounced "bry" to rhyme with "fry") they are simply sublime.

Matzo brei is a Passover tradition when Jews avoid unleavened baked goods. Matzo crackers, made with wheat and water, stand in as the bread of choice and in a brei, a frittata-like dish with a difference, the crackers are crumbled or broken into bits, soaked, and then stirred into eggs and veggies and cooked.

But Matzo Brei makes a delicious meal any time of the year. This vegan version is one of my favorite quickie breakfasts or brunches for weekends and it packs enough muscle to stand in for a light lunch or dinner even.

In my version, I don't soak the crackers. Rather, I semi-submerge them in the chickpea batter which softens some bits and leaves others crisp, offering a nice contrast.

I hope you will try it. It feels indulgent enough, yet it takes very little time -- and skill -- to make. And it's quite versatile so you can tweak it to your and your family's tastes.

If you do, be sure to let me know in the comments below, or take a photo and tag @HolyCowVegan on Instagram.

The Manischewitz brand, which I used and is perhaps the most commonly available here in the U.S., is made with only wheat and water. So yes, they are perfectly safe to use in this vegan recipe, although if you use another kind be sure to read the labels.

Can I make this recipe gluten-free?

Yes, the only ingredient with gluten in this recipe are the matzo crackers. The Manischewitz gluten-free crackers have eggs in them but I found at least one brand, Lakewood, that is both gluten-free and vegan.

Can I add other vegetables to this frittata?

Yes, use any quick-cooking veggie like spinach greens or zucchini or bell peppers here. I think it tastes especially good with mushrooms, but run with your imagination and you'll no doubt land somewhere delicious.

How to make the vegan matzo brei

Begin by mixing the chickpea batter. Place the chickpea and rice flours in a bowl with the minced rosemary, parsley and jalapeno. Add salt and water (I needed 1 ¼ cups) and whisk to make a batter that's thick but pours easily.

Heat the oil and saute the sliced onions and minced garlic with a pinch of salt until the onions are soft.

Get the broiler going on high.

Add the matzo crackers, broken into pieces, to the skillet. You can break them up into smaller pieces, if you like, I like rather large pieces so some stay on top and become a bit charred under the broiler and retain some of their crispiness.

Mix the matzo crackers into the veggies just lightly, then pour in the chickpea batter evenly into the skillet.

Let the matzo brei cook over medium heat until the edges look dry and bubbles rise in the center.

Scatter more parsley or fresh chives on the brei and serve hot or warm. 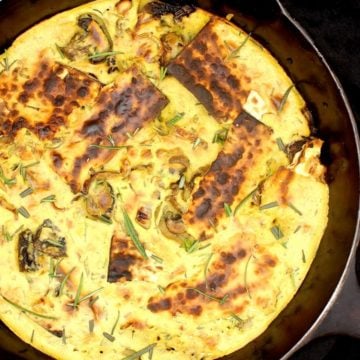