George, my sourdough starter (thanks for naming him, ChannonD --and thanks everyone for your great suggestions), has been bubbling away for a few weeks now and I've been using him to make waffles, pancakes, and sandwich breads with different combinations of flours: all white, part whole-wheat, and all whole-wheat. You already have my recipe for Sourdough Sandwich Bread, and today, I want to share with you a recipe for my All Whole Wheat Sourdough Sandwich bread with no added yeast. 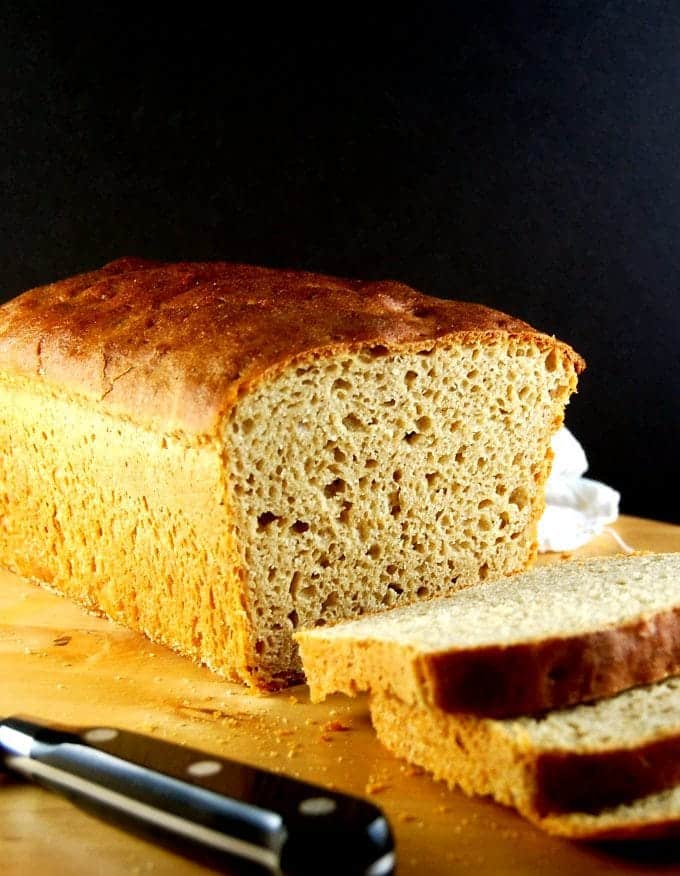 This is a super simple bread, and it requires just a few main ingredients: Flour, sourdough starter, and some sugar or molasses. I also add a couple of teaspoons of apple cider vinegar into the mix to help with the rise. Whole wheat flour is low in gluten, the substance that helps create structure in breads and helps them rise, and a little acid can actually help with gluten formation. You can substitute the vinegar with lemon juice. 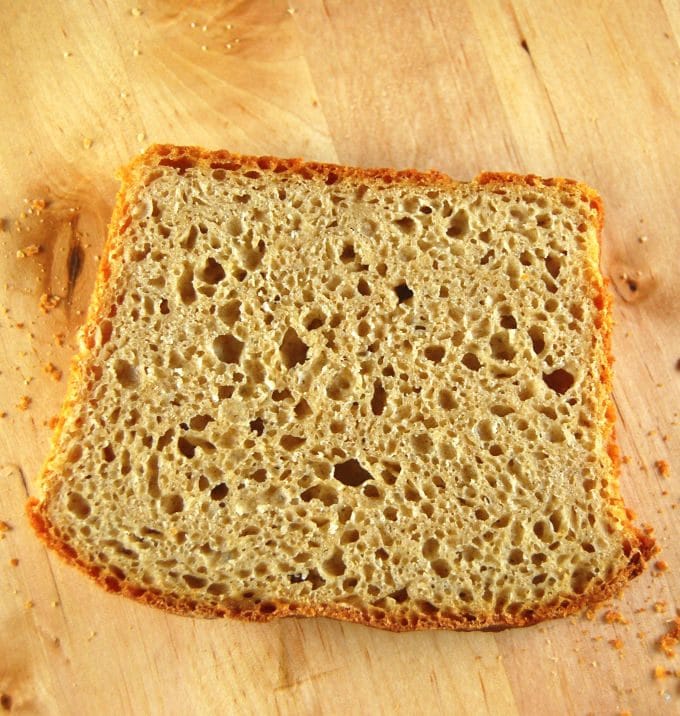 I love this bread: it has a nuttier, warmer flavor than the all-white bread, which is excellent too, and although it doesn't rise as high, it has, as you can see, a nice, open crumb -- not so open that your peanut butter or jelly would slip through, but enough to make the bread light and airy and not dense at all, as wholegrain sandwich breads sometimes tend to be. Jay, who's missing a few teeth, loves this bread with the crust trimmed away. It makes great toast too!

I haven't shared my recipe for sourdough starter because I followed the one over on the King Arthur blog, except, as I told you in my last sourdough bread post, my sourdough is more hydrated-- it uses more water. If you want me to share the recipe for my starter, give me a holler and I will do so.

There is some waiting involved in the recipe, and you need to be patient, in order to help the gluten form. There are three rise times, including an overnight wait time while the flour and sourdough soak together. Trust me, it's all necessary to make sure you get the best bread possible.

I am going to keep this post short because I have something to talk about after the recipe. Stay tuned if you're interested, and weigh in if you want to. I would love to hear what you think. 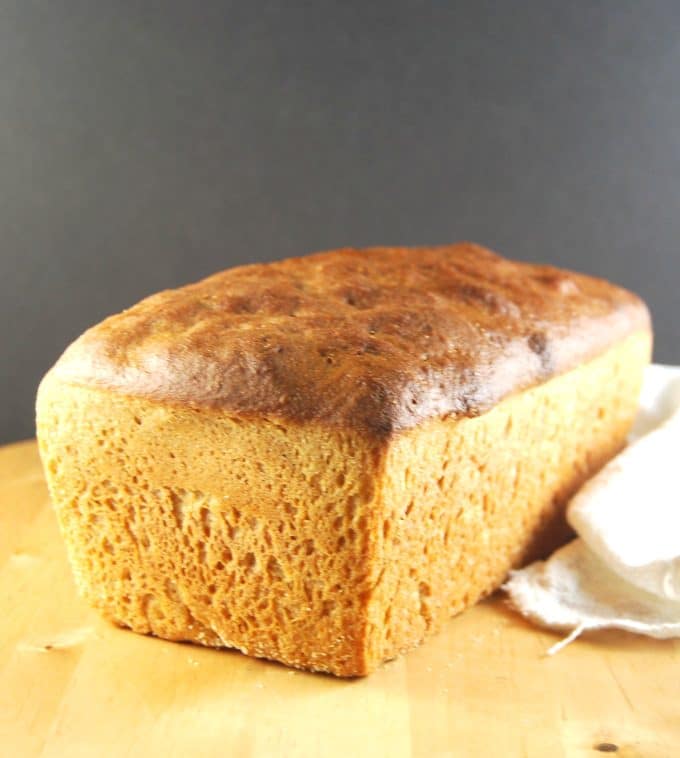 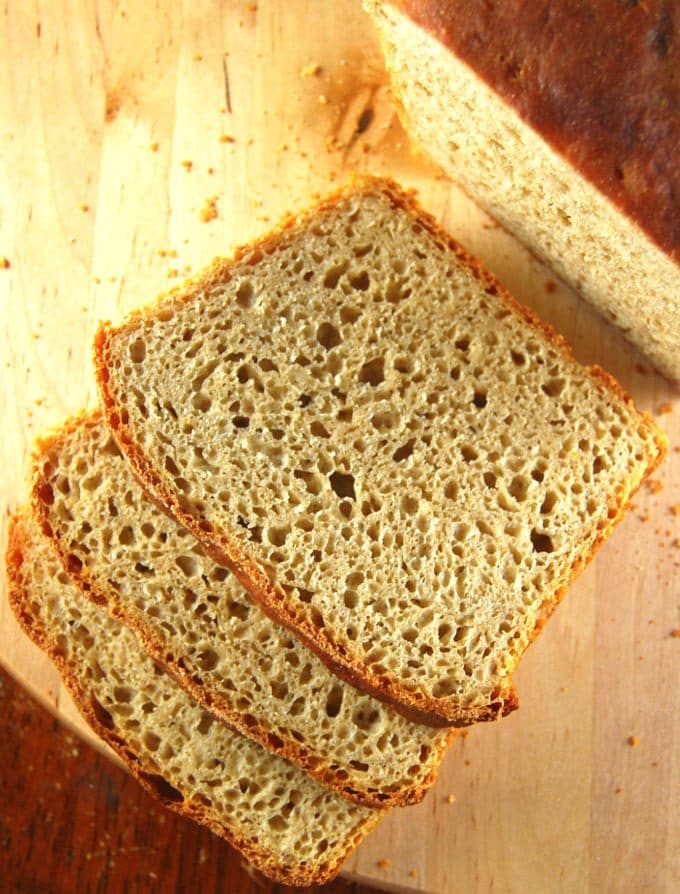 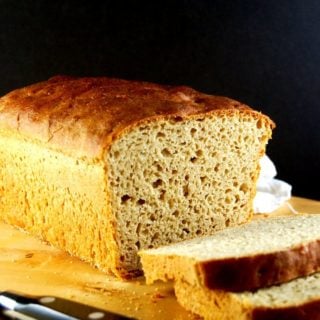 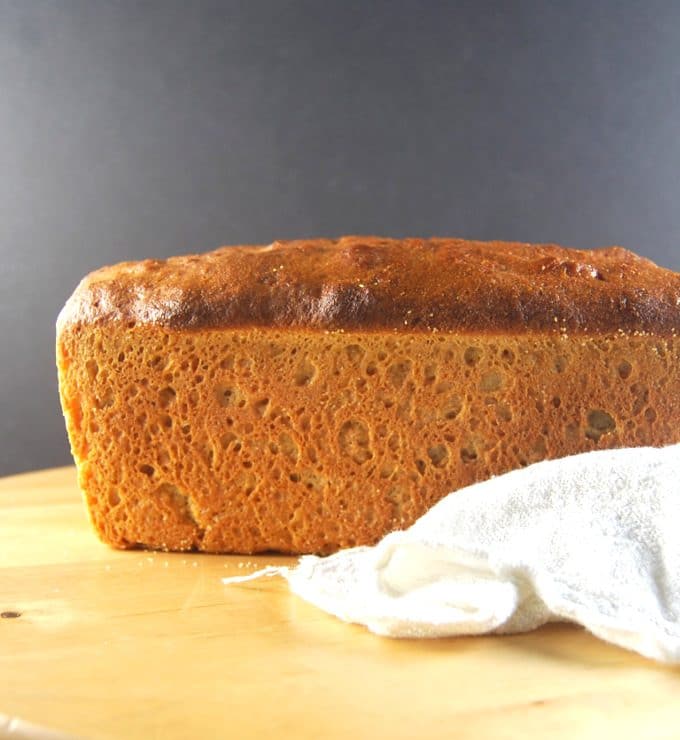 Make these wholegrain breads next:

A reader left this  comment on my last post on vegan stews: "Do you know "vegan" excludes lamb? I'm unsubscribing," wrote this person who didn't give their name, nor, it appears, bothered to look through the post or at the recipe for my Irish Lamb Stew which is made with TVP chunks and is indeed very vegan.

The next day, another reader, alluding to this reader's comment, wrote on a different post: "I am new to this community and I’ve had some doubts. I left a group because there was comments on how people should die because they held a pig roast. I love pigs, but I want to work on compassion for “all” creatures. The point is there seems to be some severe extreme militia type points of view in this community."

There's something seriously wrong with the way we are presenting ourselves to the world if we are giving new vegans, and those considering embracing a nonviolent lifestyle, the idea that vegans are intolerant, or worse, "militia type" people who would condone violence if it was directed toward people who are eating animals.

I get it -- it's frustrating for us ethical vegans. Billions of animals are "processed" by the food industry each year, after leading miserable lives on factory farms. Vegetarians make up just over 3 percent of the American population, and about half of these vegetarians are vegans, according to a Vegetarian Resource Group poll from this year. It's thrilling to consider the possibilities for animals if the numbers were much higher, and depressing that they aren't.

But look at it this way: there are way more vegans today in the world than there were even five or 10 years back, and certainly more than there were two decades ago, and our numbers are growing. What's even more promising is that people who are not ready to become full-fledged vegans yet are eating more plant-based meals because of all the options out there, the benefits to health, and growing awareness about animal cruelty. Meatless Mondays are catching on in workplaces and even in some school districts. The change for animals is slow in coming, and it couldn't come sooner, but it's happening.

There are many compassionate souls who love animals and do get the suffering and pain, but they still can't quite wrap themselves around the idea of giving up all meat. Desi, who is the kindest person I know and who loves animals even more passionately than I do, was vegan for a while, but eventually he did start eating meat occasionally, usually while visiting friends or family or while eating out. He eats vegan most days, and certainly at home, and that's good enough. Jay, who also loves animals and is a vegetarian, craves eggs and cheese. He saw these foods on television at the orphanage, and never -- or rarely -- got to eat them, so he longed for them when he came here. I let him eat them sometimes because they connect him to his past which he is not ready to let go of yet. I make sure I buy eggs and dairy that are responsibly sourced and humane, and I talk to him, in age-appropriate ways, about the suffering of dairy cows and egg-laying hens. My hope is that one day, when he better understands that suffering -- and I am sure he will because he's a wise little soul -- he will embrace an all-plant-based lifestyle. But I want that decision to be his, or it will never stick, the way it does not for many Indian kids who grow up in traditionally vegetarian families and start eating meat the moment they experience independence.

It might be good to remind ourselves of what's happening in India where Hindu extremists who call themselves "cow protectors" have been going around targeting people who eat beef (usually Muslims and Christians). In one instance, the militants forced two workers driving a truck carting beef to eat cow poop and then put the video online as a lesson to others. A man was dragged out of his home and killed because the "cow protectors" suspected he had eaten beef (investigators later found out it was mutton, goat's meat), and another man was lynched for transporting beef. A couple, suspected by the militants of carrying beef in their baggage, was beaten up at a railway station when they refused to let the "cow protectors" search their bags. The stories go on and on, each more horrifying that the other. The agenda for the "cow protectors" is not really the cows who perhaps are in greater mortal danger from consuming plastic bags floating all over the landscape in urban India. No, their agenda is persecuting religious minorities.

I digress to make this point: a true animal lover does not condone violence to humans as a means to an end; militants with an insidious agenda do. The very basis of our vegan lifestyle is rooted in non-violence, because we love all creatures and we don't want to see them suffer. As Gandhi, the father of non-violence and an animal lover himself, often pointed out, violence can be committed as surely with words as with actions. As vegans, let's stop committing violence with our words against the people who are not vegan. If we do, we'll only push them further, and that's not going to help any animals.