A fiery Mushroom Chettinad, a south Indian dish from a region known for its vibrant, spicy cuisine.

Chettinad, a region in the south Indian state of Tamil Nadu, brims over with opulent wealth, beautiful temples, and fiery cuisine that can make your eyes, nose, and mouth water simultaneously. And if you think that sounds like most Indian food, you've got another think coming

Chettinad cuisine and its unique fieriness come from a liberal use of black pepper. While black pepper is part of nearly every garam masala or spicy curry ever cooked up in India, its heat and flavor usually mingles and merges with the heat and flavors of other spices during the cooking process. But in Chettinad cuisine the black pepper is usually added to dishes at the tail end, separating out its fieriness from that of other spices.

The first Chettinad dish I ever ate was at a restaurant in Chennai (then Madras), and it was a chicken curry. A Chettinad chicken curry was also one of the first dishes I learned how to cook. As my own food preferences have changed over the years, I have tried to translate those well-remembered flavors into plant-based dishes, like the Spicy Mushroom Chettinad I have for you today.

This is a supremely healthy dish that's quite easy to make, but do adjust the pepper and chilies per your taste and tolerance. I usually tone down the heat in my own recipes because of Desi's sensitivity to spicy food-- were my dad cooking this dish, he'd probably add four times as much and still find the recipe not spicy enough. Still, this curry, when I made it this past weekend, brought tears to my eyes.

This dish tastes best with an Indian flatbread, like an Aloo Paratha, which balances the heat perfectly. It's also great over some boiled white rice. 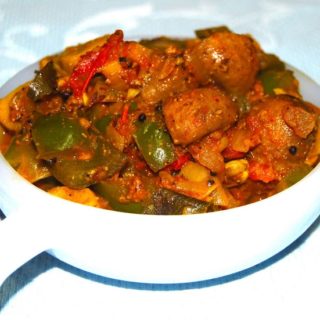