Tawa Pulao is a delicious Indian street food. It's a stir fry of rice and vegetables spiced with pav bhaji masala.

When Desi and I lived in Mumbai -- or Bombay as those of us who left the city in those days still like to call it -- there were nights, after wrapping up the graveyard shift at the newspaper we both worked for, when we would set out with co-workers and friends to scour the city's streets for food.

Like New York City, Bombay never sleeps. Anywhere you are in the city at night, you can be guaranteed that it will never be quiet, the way things can sometimes be even during the day in some Washington neighborhoods. Cabbies, the homeless, people stuck after work without a way to get home after the last train chugged out of the station at 1 a.m., night owls, young men and women too busy having fun -- or just too bored -- to go home. Bombayites of every stripe stalk the city's streets each night, and their very presence creates a very basic need, for food.

While 24-hour eateries and supermarkets are not easily found in Bombay the way they are in New York or London -- or at least they weren't when I lived there -- there is no shortage of food. That's because come night, food carts (small, wooden carts on wheels that are pushed around manually) spring to life, creating little oases for the hungry and the bored and just about everyone in between. The food they sell is cheap, almost always delicious, and healthy -- nutritionally -- although perhaps not hygienic.

If you are a regular, you know where the best places to eat are. Back then, there was the guy who sold incredible kabobs on one of the streets around Gateway of India. And the man who sold the tastiest bhurji-pav outside Dadar Station. Or if you were lucky, it would be the month of Ramadan and Mohammad Ali Road  would come alive after midnight with rows upon rows of food vendors selling everything from fresh breads and spicy curries to  malpuas and Vegan Phirni The vendors of Mohammad Ali Road sprung up decades ago to cater to Muslims looking to break their fast each night, but stayed on to satisfy the city's foodies who descend on this mecca of food in droves.

One of the vegetarian foods we'd often come across during our post-midnight bingeing tours in Bombay is Tawa Pulao, a delicious and rather simple Indian-style stir-fry of rice and vegetables.

Tawa pulao is named thus because the stir-frying -- a technique very similar to that used to make Vegetable Fried Rice -- is done on an enormous, slightly curved skillet called a Tawa or Tava. The vendor portions out the tawa for different foods, all being cooked at the same time. In one quarter is the bhaji for pav-bhaji getting warmed up before being spooned onto plates, and right next to it are the yellow-gold patties  for Ragda Pattice, staying warm until a customer comes calling for them. In the remaining half of the tawa, the vendor -- rapidly maneuvering a  steel ladle that makes loud, metallic but rhythmic sounds as it scrapes against the tava  -- is stir-frying some onions, tomatoes and green peppers for the Tawa Pulao.

If you are new to Indian cooking, or just want to cook something that takes you into the city's belly without actually going there, I'd recommend the Tawa Pulao. This is a strikingly easy recipe, because a lot of the flavor comes from an addition straight out of the packet: pav bhaji masala. You can make your own, but this is one powdered spice that I -- as much as making the spice mixes at home -- prefer to buy pre-made because when you make it at home you can't always get the flavor just as it should be. If you happen to have a large wok, the kind you'd use for a Chinese stir-fry, this is the time to break it out of the cupboard.

Tawa Pulao, in Indian kitchens, often gets cooked with leftover rice, partly because there's no better way to eat leftover rice, but also because the slightly harder texture of leftover rice is perfect for the skillet and all that stir-frying. Too-soft, fresh rice would mush up. If you don't have leftover rice, or don't have time to make some beforehand for this dish, try spreading it out on a single layer on a cookie sheet, after the rice is cooked, to let the moisture evaporate. See this post on cooking fluffy basmati rice to learn more about cooking rice grains so they remain separate. 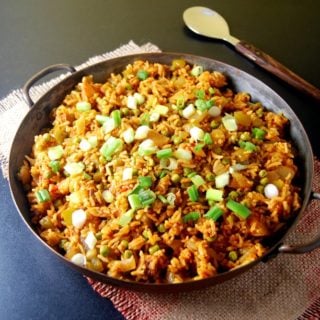