Jump to Recipe Pin Recipe
Delicious eggplant in a spicy sauce with cooling mint stirred in.

This minty Eggplant Masala is something I threw together one weeknight when I didn't have much time to fuss with a new recipe, yet wanted to try something different.

I love mint. It's cooling properties are priceless in summer, and what's more, it's a wonderfully unfussy herb that grows with minimal care. I had planted some mint years ago, and when we moved, I brought it with me and plunked it into a corner of my backyard. It comes back year after year, giving me more goodness than I can handle. In fact, right now, it's threatening to take over the entire vegetable patch.

In Indian cuisine, mint is a commonly used herb. In our kitchen, it comes second only to coriander or cilantro in frequency of use. It's great in chutneys and marinades, but the easiest way to get a hit of minty fresh goodness is to use it as a garnish in curries and subzis. You cannot miss.

For my Eggplant Masala, I blended the mint with the other masala ingredients and cooked it. Its soothing flavor dovetailed nicely with the spices and the sweetness of the jaggery.

I also broiled the eggplant first because that gives it a velvety texture and also helps reduce the cooking time because the eggplant can cook in the oven during the time you put together the rest of the recipe. So here it is. Enjoy! 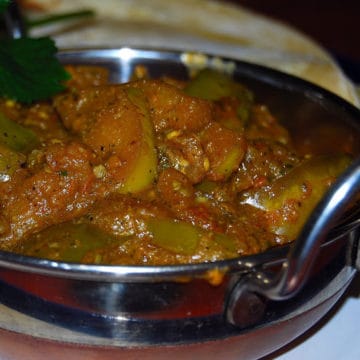