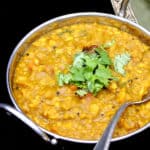 Although its name suggests royalty, a Panchmel Dal or Panchratna Dal, native to the Indian state of Rajasthan and made with five kinds of lentils (arhar dal, moong dal, masoor dal, urad dal and chana dal), is an easy enough dish to cook up for a weeknight. Like most dal recipes, this one is extremely nutritious and delicious and it's also vegan, soy-free, nut-free and gluten-free.

A Panchmel Dal starts out by being special enough because it's a confluence of five lentils--five jewels, according to the other name it goes by, Panchratna Dal.

But what makes it even more exquisite is that this thoughtful blend of lentils, each with a personality of its own, makes a dal that is richly textured and flavored, as well as innately healthy.

Let me add one rider here: in Rajasthan, the beautiful western Indian state where it originates from, this dal is not necessarily healthy. Healthier, perhaps, than other foods made here--this is a land known for its fried foods like kachori and its voracious use of ghee in just about everything. And ghee finds its way, in oodles, into a Panchmel Dal as well.

But take out most of that fat, replace some of it with vegetable oil, and what you're left with is a tasty, nutritious dish you could eat any day of the year and feel good about.

What lentils are used in a Rajasthani panchmel dal?

Do I need to soak the dals before cooking?

I usually don't soak lentils if I am pressure cooking them, or if I am cooking them in the Instant Pot. But if you plan to do this on the stovetop, in a saucepan, it's a good idea to soak them for a couple of hours or even overnight to reduce cooking time.

How long do I cook the lentils in the Instant Pot?

You will need 10 minutes on high pressure in an Instant Pot. Wash the lentils and cover them with at least two to three inches of water. If you use an Indian style pressure cooker that whistles, cook the dals for four whistles.

What if I don't have the five lentils? Can I make this with just one of two?

Yes! Any lentil would taste great with the spices that go into this dal, and if you don't have all five you can certainly just use one or two or three or four. Just make sure you increase the proportion of the dals accordingly. I used a total of 1 ¼th cups of lentils in this recipe--¼th cup of each kind.

What do I serve this dal with?

This dal goes really nicely with any rice dish, including basmati rice, or roti. A naan, like this vegan naan, is wonderful too. Serve a sabzi on the side, like this Cauliflower Sabzi or this Bhindi Masala. 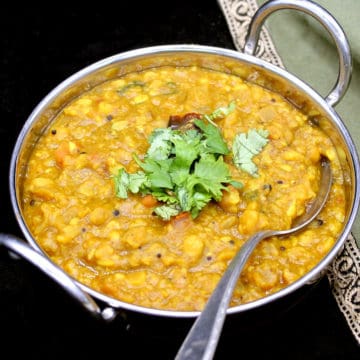 Visual learner? Here's a link to my YouTube video of this Panchmel Dal.