Jump to Recipe Pin Recipe
A delicious and fresh Pressure Cooker Pasta with Swiss Chard and Sundried Tomatoes. This recipe is a real timesaver and you can make it even speedier by making your pesto ahead of time and freezing it.

Here's one way to make cooking pasta even easier with less cleanup to boot: my Pressure Cooker Pasta with Swiss Chard and Sundried Tomato Pesto.

I have been a changed woman since I found out that cooking pasta in the pressure cooker is not just possible, it is rather perfect and kinda fun. I don't know about you, but when I make pasta, the part where you bring a pot of water to boil and then wait for the pasta to cook is the most boring -- not to mention time-consuming -- part. Even if you're working on other prep for the sauce during that time, like I usually do, it is, literally, waiting and watching the pot for the water to boil. I am convinced that whoever coined that idiom was very likely making pasta.

Then there's that huge pot you need to boil the pasta in that takes up half of the dishwasher rack or is just too tall to fit into the dishwasher (yeah, that kind of stuff's a big deal for me).

Anyway, to make a long story short, a pressure cooker pasta is pretty much a one-pot meal and it's a timesaver. You bung in the ingredients and you let the cooker do its thing (for a very short time) and present you with a perfectly cooked, al dente pasta. And no, you are not allowed to slap your hands to your cheeks and yell sacrilegio! before you have tried it at least once. I was skeptical too, at first, but I was amazed the first time I made it and sold when Jay peppered dinnertime with the word "yummy" more times than I could count.

I used elbow macaroni because, like all kids, Jay seems to have a thing for it and it's just easier for me to make him eat pasta when it's in a shape he likes. But penne or fusilli pasta are good choices for the pressure cooker. Feel free to use this recipe as a template and adjust to your own favorite pasta recipe. I added some Swiss chard to the pressure cooker with the pasta, and some delicious garlic, and in the end, before serving, I stirred in a savory sundried tomato pesto made with one of my favorite herbs, dill. You could use a basil pesto or just about any pesto that you love. To save even more time on weeknights, make the pesto ahead of time and freeze it. 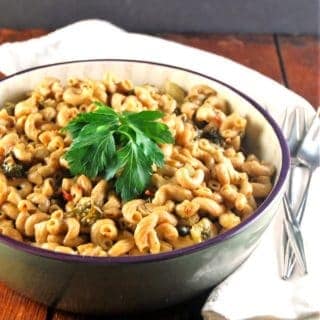